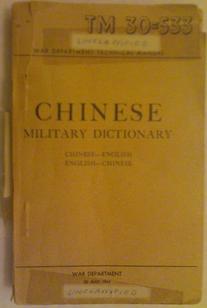 A pocket sized (4×6”) US Military publication under the signature of G.C. Marshall, Chief of Staff.  All entries include hand-written Chinese characters, “Wade Romanization”, and English.  Characters are very hard to distinguish, printed too light, and inconsistent quality.  The Romanization listed as “Wade Romanization” is actually likely Wade-Giles based on the date of publication and the sources, but is not compatible with the modern mainland hanyu pinyin. Also, characters are not equal to either modern simplified or traditional, but most likely 95% or more overlap with Taiwan use traditional characters. The book is quite interesting for historical purposes, but not a handy reference for Chinese speakers who have learned Hanyu Pinyin and Simplified Characters.  Based on 7 primary references and several secondary references (interestingly including several English-Japanese military references). 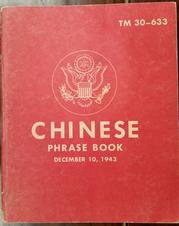 Entries in this simple handbook have four items for each word entered: English, Pronunciation (some type of phonetic attempt), Wade System (a standardized Romanization with tone numbers), and Chinese Writing (typed charachters) for each entry.  Organized by topic, for pocket or field use, including the following main headings: Emergency Expressions, General Expressions, Personal Needs, Location and Terrain, Roads and Transportation, Communications, Reconnaissance, Landing a Plane, Numbers, Size, Time, Etc., Road Signs, and other information.

No publishing data, but carries the following inside the front cover “TM 30-633, Chinese Phrase Book, is published for military personnel only, and is not to be republished in whole or in part without the consent of the War Department.”  Signed by Order of the Secretary of War, by G.C. Marshal, Chief of Staff, and J.A. Ulio, The Adjutant General. 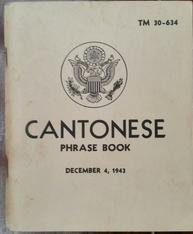 TM 30-634
Cantonese Phrasebook, December 4, 1943
War Department, Washington DC.
Marked almost the same as the Chinese (Mandarin) phrase book above.  Sections are similarly organized with largely the same vocabulary.  The book is shorter as it has only three items per entry (no Wade System Romanization).
135 pages, approximately 4″x4.5″