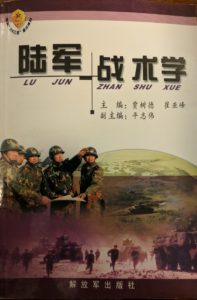 Description: This academic study of Army tactics was undertaken as an important project (重点项目) of the PLA’s “2110 Programme” (2110工程).  The PLA’s 2110 Programme was a CMC directed set of projects to be completed in the first 10 years of the 21st Century (thus “21-10”, or 2110), covering the ten year period of both the 10th Five Year Plan (十五) and the 11th Five Year Plan (十一五).  According to the preface, the text was created as part of the natural development of the field of study originally known as Combined Tactics Study (合同战术学) was raised form a second grade academic field to a first grade academic field, and the college’s certification to issue doctorates in the field of study, as well as the natural result of the unending development of the college’s research and teaching in the field of the Study of Army Tactics (陆军战术学).  The text covers: Army Combat/Battles (陆军战斗), Army Tactics (陆军战术), the Formation and Evolution of Army Tactics (陆军战术的形成与发展), Army Combat Forces (陆军战斗力量), Army Offensive Battles (陆军进攻战斗), Army Defensive Battles (陆军防御战斗), Army Tactical Command (陆军战斗指挥), Army Combat Sustainment (陆军战斗保障), Army Combat Political Work (陆军战斗政治工作), The Art of Employing Basic Tenets and Principles of Army Tactics (战术基本原理、原则的运用艺术).