The English – Chinese Dictionary of Military and Associated Terms 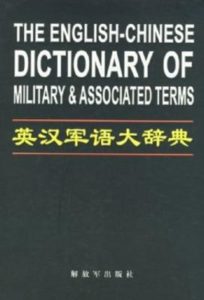 Description: English terms translated to Chinese only (no Chinese to English), includes notes distinguishing between U.S. or British use terms in some cases.  It appears to be designed to translate western military terms and ideas into Chinese.  This dictionary includes an unlabeled appendix with terms that begin with a number instead of a letter.  An appendix gives translations of U.S., British, and Japanese ranks (note: translation of foreign ranks, it does not give the PLA or any other Chinese military’s own rank system as direct comparison).  Note, in all three cases (US, British, Japan) the English term is given with service variations, and in all cases there is only one “joint” or all-service Chinese rank.

英汉军语大辞典
The English – Chinese Dictionary of Military and Associated Terms