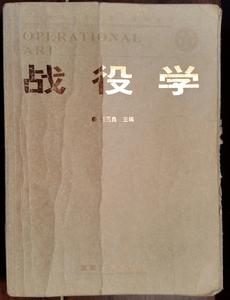 Description: A Chinese textbook published by the Chinese PLA National Defense University (CNDU) as an academic study on the topic of the operational or campaign level of war.  The beginning is a very academic approach to the history of the concepts, principles, key historic events shaping the subject, and to some extent, different views in different countries.  As the study gets more into practical application, it clearly becomes more focused on instructing the PLA’s version of Operational Art.  It covers practical topics such as military analysis of terrain and climate, the PLA’s planning and preparation process, including their version of a standard “Operations Order” format and staff planning process.  The second half of the large study is a series of example or format campaigns (which some analysts refer to as the canonical campaigns) and description of considerations and unique features for each campaign.  Covers three major joint campaigns and fourteen service lead campaigns.  A 2006 printing is a 6″ x 8″ tall hardbound grayish-green cover, and a 2007 printing is part of a larger NDU series in tan paperback at 7″ x 9.5″. Both are the same edition, despite one section being broken out into its own chapter in the reprint, making a slight change to chapter numbering.