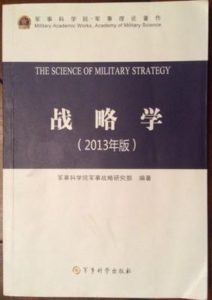 Description:  The 2013 Science of Military Strategy (SMS) is an update on the previous 1987 and 2001 editions of the same title published by the Academy of Military Sciences (AMS).  Chinese only text.  Its publish began much debate about the PLA’s direction under Xi Jinping, and the focus or goals of then upcoming PLA reforms that began in earnest almost two years after its publish.  AMS’s refresh and republish of SMS also renewed the competition between AMS and NDU to be the center of strategic thought in the PLA, as the NDU shortly thereafter refreshed its text under the same title.  This SMS describes the PLA’s concept of what strategy is, reassures on their focus on a defensive strategy focused on active defense (积极防御), to meet the military’s historic missions (军队历史使命), prepare for localized wars under informationized conditions (信息化条件下局部战争), and the employment of military forces in peacetime (和平时期军事力量运用), all under the “new situation” (新形势下).  It gained much attention for its description of wars that AMS thought China could be facing in the near future (我国可能面临的战争), and the expanded discussion of non-war military actions (NWMA, or MOOTW – 非战争军事行动) — which appeared to move a lot more activities into this category, and expound upon confrontational (对抗性) use of military force in peacetime — as well as its discussions of military deterrence activities (军事威慑行动), and military struggle in the nuclear, space and cyber domains (核、天、网领域军事斗争).  It should not be considered a paper on the PRC’s strategy, but rather a text essential to understanding how they think about strategy.